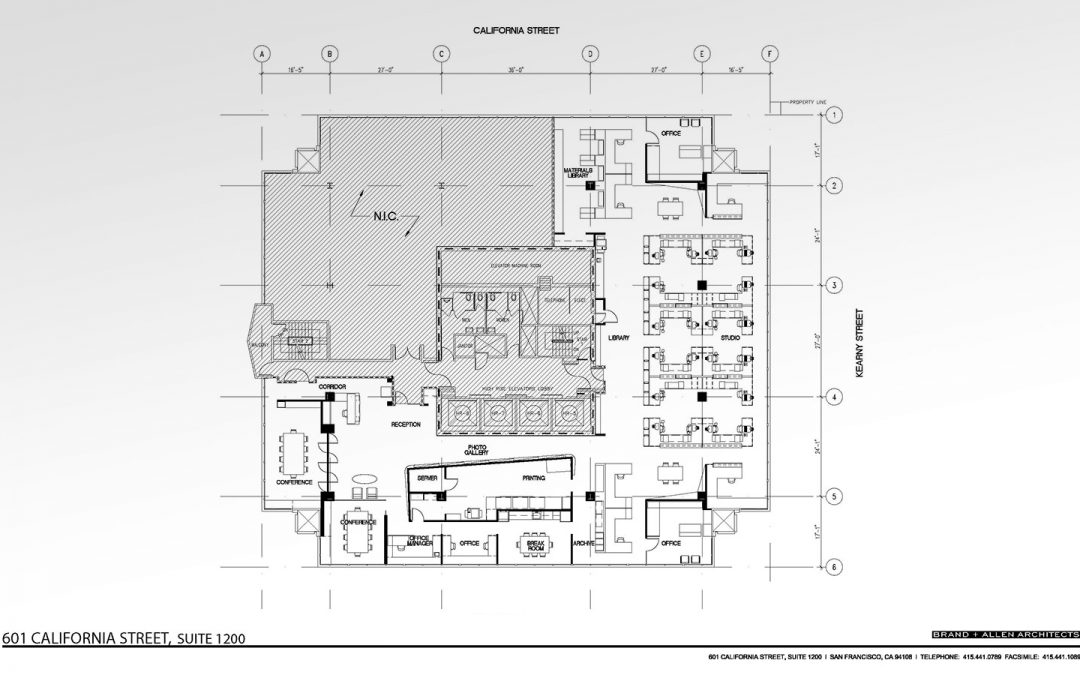 Want to get a rough idea how much space you need, or how many people can fit in a space? Try our 3-question Space Estimator

There are many areas in which a tenant in today’s marketplace requires the expert guidance from real estate and design professionals, but understanding the basic concepts and terms of these areas will make you a better informed client and allow your real estate and design consultants to serve you even more effectively.

Area calculations are one of the prime areas where a little basic understanding will go a long way in helping you understand important parts of the deal making process and avoid some potentially costly misunderstandings.

Area calculations would seem to be rather simple to understand but really are not due to confusing jargon and recent changes in generally accepted calculation practices.

An unwary tenant or one represented by a broker or agent who does not understand the subtleties of space calculation puts himself at risk of, at least, not getting the benefits of accurate comparisons between potential sites and, more importantly, paying more for a space than they should.

These BOMA Standards are the calculation methodology published by the Building Owners and Managers Association in an effort to insure accurate comparisons between buildings. They are, however, only guidelines and not a law or enforceable regimen, as is commonly thought. Thus, owners are free to deviate from the standards as they may wish and it is up to the tenant to ascertain if the calculations are based on strict “BOMA calculations.”

Often an owner will use the term “modified BOMA” to describe methods by which his building is calculated. This means that they have not followed some portions of the BOMA guidelines. They generally do this, understandably, to make their rentable areas larger. When you hear “modified BOMA”, be certain to get an explanation of what modifications to the BOMA Standards were used.

For all the trouble and expense that owners go to in calculating areas and load factors, they can often get very cavalier in ignoring them when market conditions dictate. In a soft market, owners will often discount their load factors to lower factors to be more in line with competing buildings. This generally has the effect of lowering the rent on a space to make it more competitive.

Similarly, in a tight market owners can choose to quote an artificially high load factor to maximize their gains when they don’t have to worry about being as competitive.

Now, with these basics behind us let’s concentrate on what area calculations really mean to a prospective tenant: not much(!). They mean a great deal to an owner as they are what are used to set pro forma rates, establish targeted returns on investment, etc. However, to a tenant they are not as important as the total rent dollars that will be charged on a space (tangible) and how well the space suits the tenant’s needs (intangible). Taken together, these two items allow the tenant to assess the relative value of a space.

This assessment of value is the most important service that your broker and architect assist you with. Over concentration on the intricacies of area calculations can divert a tenant’s attention away from this important value assessment.

If you just can’t keep from getting caught up in analyzing area calculations from various buildings that you are considering, remember one last important point:

BOMA recently re-wrote their standards to allow common areas not on a tenant’s own floor (fan rooms, basement electrical rooms, building lobbies, guard stations, etc., etc.) to be included in rentable calculations. This was, heretofore, strictly forbidden by the BOMA standards and only the boldest owners openly admitted to including these areas.

Most owners are now rushing to re-calculate their buildings to include this additional chargeable area and are seeing anywhere from 4% to 8% increases over their previous rentable calculations. This means that they are now able, under strict compliance with the BOMA standards, increase the rentable area (and therefore the rent) of a space without the space actually getting any larger.

Usable area does not increase because of this, only the rentable area and, therefore, the total rent dollars charged for the same space. Will rental rates also adjust downward to counteract this windfall? Of course not.

The bright spot for tenants in this change is that most of the variations that owners would make in their “BOMA” calculations are now accepted practices and, generally, all owners will be taking advantages of all of the newly allowed additions. So, there will tend to be fewer variations to watch out for between buildings that advertise “New BOMA Calculations.”

This development makes it all the more important to inquire as to the way in which a space is calculated (to strict BOMA standards?, to the old or new BOMA standards?) and that all calculations are adjusted to be fairly compared.

This development also underscores the wisdom of a tenant paying only passing attention to the specifics of area calculations and concentrating instead on the relative value of a space versus other possible locations.

Is your lease is up within the next three years? We should talk now.

We go the extra mile for our clients…big and small.